Being an artist I thought I'd do a cutaway and paint my arms on the side! 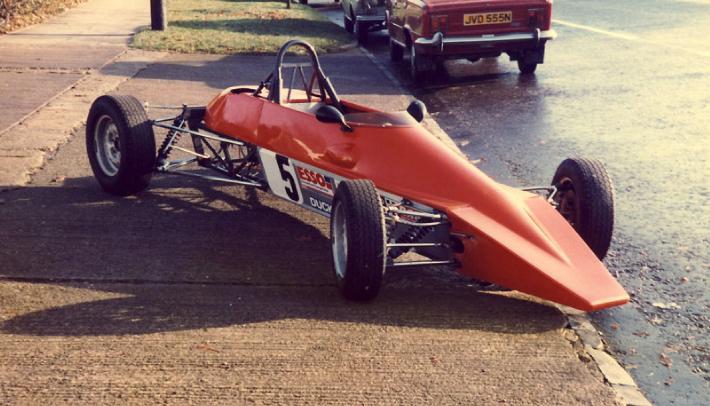 Having sold the DNC and found a decent job, I brought the ex Chris Reynalds PRS RH01. This car had a bit of a history. Built by Chris at the works in 1979 and raced in the National Championships in 79 & 80. It was badly damaged at Brands Hatch when Chris T boned American Jon Bekhuis and needed the complete front end replaced. In another accident the car was flipped over snapping off the roll hoop, putting Chris in hospital but he made a full recovery - lucky he was only about 5ft tall! The car was totally rebuilt before I took possesion.

Turning in to the Mallory Park hairpin

The old Russell Corner at Snetterton - A challenge to take flat out!

As Nev Cooke lent me his 750 car, I could only return the favour by letting him drive my Formula Ford at Lydden Hill. I finished work in Germany the night before and drove overnight arriving at the circuit in the early hours. Nev was getting ready to go when the heavens opened and the track became very wet. Nev did'nt want to risk my car in the conditions so a quick deal was done with the organisers and I ended up driving the car using his helmet. Ironically the rain was short lived and the race was dry! I was supposed to drive back to Germany, but was so tired that I went back to my parents in Stevenage and flew back a couple of days later. Those were the days!

Making a cock up of Becketts at Silverstone

The free entry SUN day at Brands Hatch. The SUN Newspaper gave out free tickets so the place was full!

In 1984 my car was sold and I brought a half share in Andrew Whitehouse's PRS. It saved dragging two cars around the country and cut down on the expense. I had finished working abroad and was now married and working as a freelance Illustrator in Sale, Cheshire

The Assembly Area at Silverstone

After we witnessed a serious accident to Simon Frosdick in his PRS at Mallory Park we decided to add an extra rollover hoop to our car. Personally I think it looks better as well as being safer

Getting ready to go out

Getting ready to go out